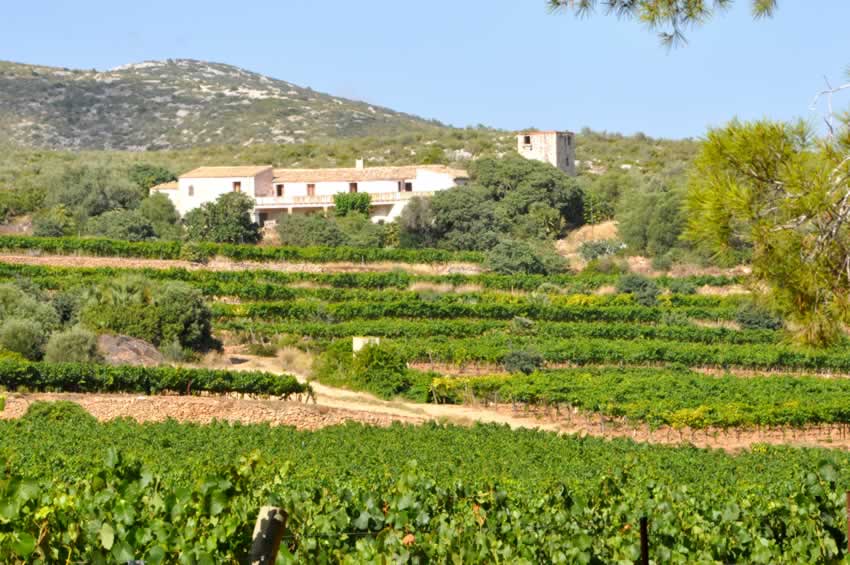 Garraf Park covers an area of 12,820 hectares of limestone hills, which in contact with water and air, have eroded over time to form caves, potholes, sinkholes and limestone pavements. The landscape is mostly Mediterranean scrubland, featuring the vegetation typical of the area: dense thickets of low rise shrubs and herbs such as rosemary and thyme. There are some wooded areas with Aleppo pine trees and holm oaks most of which have been affected by forest fires and are in process of regeneration. Other trees include wild olive, fig and arbutus. The margalló deserves a special mention. It is a Mediterranean fan palm, which is the most characteristic plant of the area and a protected species. In the valley bottoms the vegetation is more typical of evergreen oak woodland and features evergreen oaks, madder, boxwood, lentiscus honeysuckle and viburnum.
Wildlife is limited and adapted to the hot climate, lack of water, sparse vegetation and abrupt terrain and includes wild boar, rabbits, Mediterranean tortoises, quails, Bonelli’s eagles, falcons and other birds of prey.

The park may be reached by car, by bike or on foot. At the weekend there are many cyclists and hikers. The easiest way to get to the park from Sitges is from the commercial/industrial estate Polígono de Mas Alba.  Driving through Mas Alba, going north (passing Caprabo on your right), at the last roundabout, take the second exit and between the car wash and the Llopis garden centre there is a dirt track to the right that takes you up into the park.
There are not many buildings in the park, the most representative are the masías (farmhouses) that were linked to agricultural activity such as Can Marcer, Mas Quadrell and Can Grau (wine) and Mas Maiol, el Carxol and Vallgrassa (goat herding).

These farmhouses are often grouped into a small community of three or four units, like those of Campdàsens and Els Masets and in the case of Jafra (now abandoned) even reached the size of a hamlet. Other characteristic features are the large number of dry stone walls, livestock enclosures and barraques (small circular dry stone huts or refuges for shepherds or farmers).

The building heritage of the park includes:
Plana Novella, an eclectic pre-modernist country estate (home of Pere Domènech i Grau, 1890), which after having been restored by monks became a Tibetan Buddhist Monastery in 1996. There are guided visits to the Plana Novella and Buddhist seminars and retreats are also available.
For more information on prices and timetables send an email to:
garraf@monjesbudistas.org
Tel. +34 93 150 31 74
Opening hours:
Tuesday to Friday from 9:30h – 13:30h and 15:30h – 18:30h.
Weekends and holidays 9:30h – 18:30h

Campdàsens is first mentioned in documents from 1068 as the parish of the Castle of Campdàsens. In the 13th century, mention is made of Campdàsens as a fortress and at the end of the 19th century it is described as castle ruins and slightly damaged medieval graves.

Campdàsens (13th -15th century) today is a private property consisting of a masía (stone farmhouse), a fortified Romanesque defence tower and a chapel built in 1853 featuring a rectangular doorway framed by two columns with Corinthian capitals supporting a semi-circular pediment. It also has a belfry with double arched windows.

Ca l’Amell de la Muntanya, 16th and 17th century. Agricultural masía with an adjoining 13th century defence tower, which may have formed part of the Campdàsens parish defence system. Pre-historic remains have been found in this area.

La Pleta, built in 1894, is attributed to Modernista architect Francesc Berenguer i Mestres, disciple and friend of Antoni Gaudí. The stone building is austere and functional and was designed for livestock farming. It consists of three sections, the central one being slightly more advanced and a gabled roof. The door is not centred, breaking the symmetry of the construction. Perhaps the most distinguishing feature is the original brick and stone chimney that is built over the exterior water well.

The park offices are located in the building of La Pleta. There is a loan service for people with reduced mobility, which includes hand bikes, all-terrain third wheels to adapt to wheelchairs and dossiers on adapted flora and fauna routes. Loans can be requested on the spot or reservations may be made in advance by filling out a loan form: