A walk through the centre of town 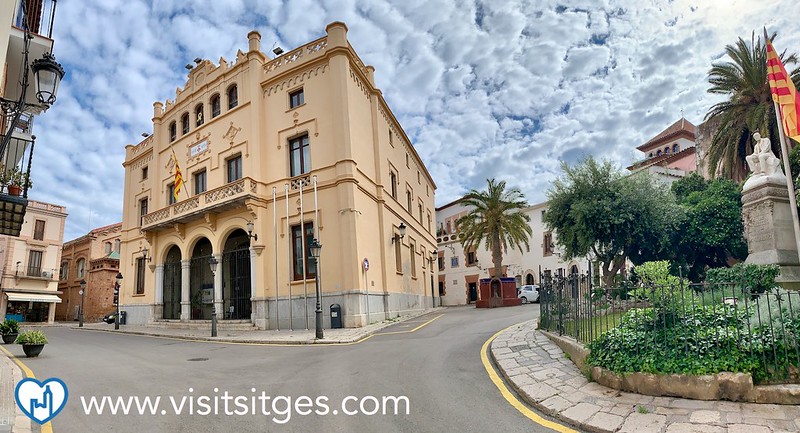 There are some lovely houses in the centre of town that were commissioned by notorious Sitges residents and built in the style that was fashionable at the time (1850-1930). The walk begins on Calle Hort Gran on the corner with Calle Rafael Llopart:

Casa Ferret Carreras, 1912-1916. Calle Hort Gran 18, on the corner with Artur Carbonell. It is an eclectic house that stands in a garden. An interesting feature of the building is its octagonal turret with a tiled roof.

Villa Remei, 1911, Architect Josep Maria Martino. Artur Carbonell, 25. The most outstanding features of this building are the wrought iron railings and the Modernista style railing on the rooftop.

Villa Subur, 1908, Architect Juli Battlevell. Avinguda Artur Carbonell, 23. A small single storey building in Modernista style. The façade is decorated with plant-like stucco reliefs and crowned by a stone balustrade with a round pediment framing the name of the house. There are also floral motives over door and window lintels.

The building is currently home to the Fundació Ave Maria, a charitable foundation. It is a Modernista-style house with an attached Romanesque style chapel. The windows designed by Domènech are different from the ground floor to those on the first floor, but share the same kind of stepped lintels reproduced again on the roof balustrade.

Leaving Calle Artur Carbonell, walk down the street and in front of Villa Havenmann turn left onto Calle Sant Bartomeu.

Casa Josep Carbonell, 1888.  Architect Jaume Suñe i Juncosa. Carrer Sant Bartomeu 26. An eclectic style building built by textile trader Josep Carbonell. The façade is decorated in stucco: the ground floor imitates masonry blocks, while the first and second floors feature floral reliefs on a blue background.  Balconies are in curved wrought iron except the middle one which is stone.

Casa Joan Robert Brauet, 1911. Architect unknown. Carrer Sant Bartomeu, 28. A feature of this three faced eclectic style building located on a chamfer in town is the stucco façade replicating stone masonry brickwork. The windows are framed with floral motives and the centre balcony is made of wrought iron.

Casa Ballester, 1919. Architect Juli M. Fossas Martínez. Calle Sant Bartomeu, 6-12. It is interesting to view this building to see the styles that were favoured at the time. This is another example of eclectic construction. The stone round arch with ornate keystones and stone jambs over the main door deserves a special mention. Other features include a mullioned window, latticed window screens and iron balcony railings.

Back tracking along Calle Sant Bartomeu, turn down Calle Sant Gaudenci (leaving casa Joan Robert Brauet on the corner, on the right hand side). From Sant Gaudenci turn left on to Calle Illa de Cuba. The walk starts at the end of Illa de Cuba where it meets Artur Carbonell:

Casa de Manuel Planas, 1908. Architect Gaietà Miret. Carrer Illa de Cuba, 21.
This Modernista house is built on a chamfer and has three façades. The architectural highlight is the two-story tribune and bay windows on the centre façade, featuring a clerestory window on the first floor and a large oval window with ornate decoration around openings on the second floor. The balcony balustrades are in forged iron.

Casa Antoni Robert Camps, 1894. Architect Salvador Vinyals Sabaté. Calle Illa de Cuba 13. This residential building has a Neo-Renaissance façade. The balcony has a richly ornate forged iron balustrade. Round arched windows are framed on either side by columns with capitals displaying floral motives and the pilasters are likewise decorated.

Casa Sebastià Sans i Bori, 1883. Architect Jaume Sunyer i Juncosa. Calle Sant Isidre 37 (corner with Carrer Illa de Cuba). In front of the house of Manuel Planas, is this impressive and unusual building, yet another example of eclectic architecture. A small inside chamfer created at the union of two identical perpendicular buildings gives rise to the main entrance featuring a portico with ionic columns upon which sits a balcony with a stone balustrade. Above and flanking the chamfer window, are two medallions featuring the initials of the owner.

Leaving the Casa Sebastià Sans i Bori to our right, continue along Calle Sant Isidre until Calle Francesc Gumà (the walk takes you past the homes of Pere Catasús and Josep Planes, brothers-in-law who in 1897 chose to build identical homes in an eclectic style. On reaching Calle Francesc Gumà, turn left to see the houses on this street starting at number 23.

Casa Pere Carreras, 1906. Architect Josep Pujol Brull. Carrer Francesc Gumà, 23. A Modernista style house built in two sections. The one on the left features a ground floor and first floor, while the right section has an additional floor. The house features wrought iron and intricately sculpted stone balustrades. Door and window lintels on the ground and first floor are ornamented with flowing floral motives sculpted in stone. The façade displays a relief of floral design in stucco. A border on the façade visually separates the ground floor from the first floor and a ceramic trencadís border separates the first floor from the second floor respectively. The cornice also features decorative elements.

Casa Antoni Carreras, 1908. Architect Eduard Mercader. Carrer Francesc Gumà,17. This Modernista house with garden features a viewpoint tower that gives onto Carrer Sant Isidre. One of the highlights of the building is a balustrade of Gothic inspiration.

Casino Prado Suburense, 1868. Architect Josep M. Martino Arroyo. The casino is a Noucentista building of two sections: one hosts the theatre hall and the other leads to the vestibule decorated by Miquel Utrillo (access is through the entrance with the stone arch). Both the façade of the central part of the building and the theatre hall are decorated with paintings by Ferrer Pino. The friezes are the work of sculptor Pere Jou.

Villa Rosa (house of Jaume Hill i Froment), 1893. Architect Jaume Suñé i Juncosa. Calle Jesús with Calle Francesc Gumà, 2. This house features classic decorative elements such as columns and pilasters crowned by Corinthian capitals and a sculpted floral border between the first and second floor.

On Calle Jesús, go to the right and view the houses at number 28 and number 16 and then retrace your steps until you meet Calle Santiago Rusiñol:

In front of Casa Severià Vilella, on the corner of Calle Illa de Cuba is Casa Francesc Bartés, 1930-31. Architect Josep M. Martino Arroyo. Calle Illa de Cuba 2-4. A feature of this Noucentista building is its chamfer tower with iron balustrade and triangular pediment over the chamfer balcony window. Under the cornice there are three arched windows

We will retrace our steps on Calle Jesús to walk towards Calle Santiago Rusiñol (which we will find on our right hand side) stopping on the way to take a look at the house on Calle Jesús, 51-53:

“Villa Anita” (house of Josep Ferrer i Torrabas, 1900. Architect Gaietà Buïgas i Monravà, Carrer Santiago Rusiñol, 33. A Neo-gothic building in three sections, the middle section is set back from the others, enough to afford a patio. The main entrance has an arched porch (leading to the front door) supporting a stone balcony with a balustrade of carved quatrefoils. Foliage-decorated carved stone mouldings are also present over window lintels.

At the end of Calle Santiago Rusiñol, turn left onto Àngel Vidal to get to Cap de la Vila (the town centre where many streets converge) to see:

Casa Bartomeu Carbonell i Mussons (also known as the Clockhouse) or Casa del Rellotge, 1913. Architect Ignasi Mas i Morell. Plaza Cap de la Vila, 7. Bartomeu Carbonell i Mussons (a textile trader) commissioned architect Ignasi Mas i Morell to design this Modernista building. One of the more striking features of the building are the tower’s 5 very small roofs, tiled in the trencadis style (a type of mosaic used in Catalan Modernism, created from broken tile shards, which Gaudí also employed). The enclosed wooden balcony on the second floor also deserves a special mention.

Casa Joan Tarrida i Ferratges, 1892. Architect Salvador Viñals. Carrer Major, 36. A Renaissance-inspired eclectic building. The construction and design of the house emphasizes the hierarchy attributed to each floor, the most important level being the principal (first floor) which has large windows in comparison to the other floors, an angular watershed over the windows and a balcony.

Casa Bartomeu Misas, 1901. Architect Salvador Viñals. Carrer Major 24. This house is an eclectic building inspired by the Renaissance, as is true of the neighbouring property at No. 36. On the first floor the openings are framed with pilasters and pediments. The roof balustrade is also an interesting feature.

Casa Maria Batlle Robert, 1890. Architect Josep Salvany Juncosa. Calle Mayor 2. An eclectic building with a façade structured in three parts relative to the importance of each floor. The first floor or principal features window carvings and boasts a long balcony with an ornamented iron railing that practically runs the whole length of the façade. The upper floor is plain in contrast.

Strolling back along the Calle Mayor, we arrive at Cap de la Vila and turn into Calle Sant Françesc where we can observe two singular buildings:

Casa Manuel Ramón, 1900. Architect Françesc Mirabent. Calle Sant Françesc 42. An eclectic-style building, it is renowned for its stucco façade featuring a profusion of fleurs-de-lis on a salmon-pink background.

Casa Pau Benazet, 1934. Calle Sant Françesc 35. Noucentista in style. A highlight of this building is the colourful floral sgraffito below the cornice, created by painter Josep María Miralles.

Continuing along Calle Parelladas towards Cap de la Vila, take a look at:

Casa Vilanova i Massó, 1852. Calle Parellades, 11. This building favours an academic Romantic style. Giant fluted Corinthian pilasters divide the façade into three parts. An elongated decorative moulding centred on the façade incorporates the date of the construction of the building. Beneath the balcony there is a sgraffito with the initials of the first owner of the property.

At this point we have come to the end of the itinerary in the centre of town. One can continue along Calle Parellades viewing the shops or take any of the streets (Calle Sant Pau, Sant Pere) that lead off Parellades and go down to the seafront to enjoy a drink or step onto the beach.