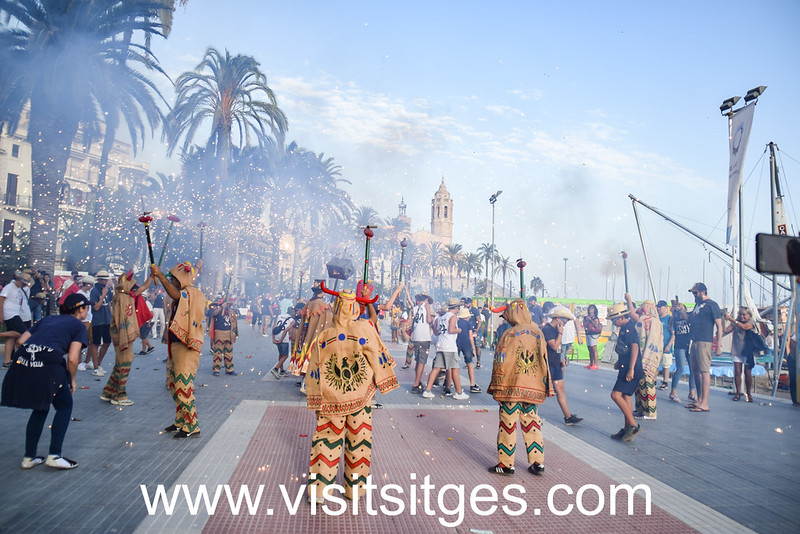 Santa Tecla is the popular festival in honour of the patron saint of Sitges, as it is Sant Bartomeu.

Santa Tecla is the “small” Fiesta Mayor, infused with local flavour (in September many visitors are already back home) with the focus on children taking the leading role. It features the “Matinal” with exhibitions of popular dances as well as paper maché giants, “big-heads”, dragons and eagles, made and paraded by the children. It is also a fiesta where fire goes mainstage with the celebration of the “Nit de Foc” held the weekend before Santa Tecla with lots of fireworks, crackers and fire beasts in the old town of Sitges.

Needless to say, in 2020, Santa Tecla was not celebrated in the traditional sense, having been practically limited to the firing of the “Morterets”, the celebration of mass, a parade exhibiting the various Fiesta Mayor popular dances, the fun “Gitanes d’Antes”, some on-line events and not much else.

The celebration of Santa Tecla 2021 will bear a closer resemblance to the traditional “Festa Petita” as we know it. The Commission and Sitges City Council have agreed to allow limited parades for both the Children’s Morning and the parading of the image of Santa Tecla, on September 23rd.

The programme also includes the shows featuring the children on Sunday 19th in Plaça de Catalunya, a firework display on the night of the 22nd September, the traditional “Morterets” and mass.

No prior reservation is required for seating along the route of the parades.

* At the beginning of June, the Generalitat de Catalunya (autonomous government of Catalonia) approved measures regulating and authorizing the celebration of festivities, festivals and popular events and thus the programme of the Sitges Fiesta Mayor has been drawn up complying with the established protocols. 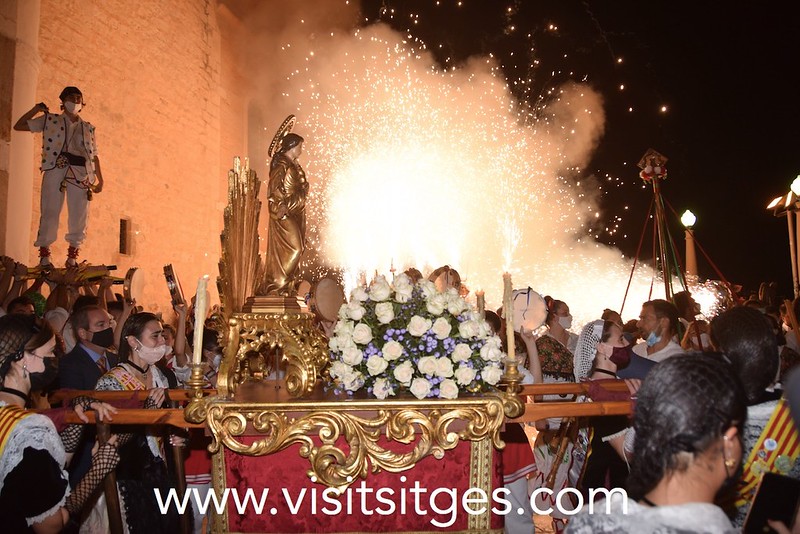 The schedules and location of the events are subject to current health regulations and the weather.

In event of rain or modification of the sanitary measures, kindly refer to the official social networks @visitsitges @fmsitges and @ajsitges


Terramar Gardens Dinner of associations in which the Pubilla and the Heir of Sitges 2021 will be proclaimed.

The doors will be open to the public, with a controlled and limited capacity, from 10.30 pm, when the proclamation ceremony will begin.

The Proclamation of the Pubilla and the Heir of Sitges 2021 will be broadcast live via the Facebook page of Visit Sitges.

During the hours of Parish celebrations

Reissue of the customization of cloth bags.

During the hours of Parish celebrations

No prior reservation is required.

17:00h the different Dracs (dragons) and fire groups will do their performances.

20:30h TRANSFER OF THE IMAGE OF SANTA TECLA
Parish of Sant Bartomeu and Santa Tecla

The Municipal Commission of the Festa Major de Sant Bartomeu and Santa Tecla, representing the municipal authorities, will recieve the icon of Santa Tecla from parish vicar Josep Pausas and to the sound of the Grallers de La Sitja, will parade it this year to the Hall of Cases Noves, the location having been chosen by Santa Tecla 2021 Pendonist, Dora Pons Sánchez

* You are kindly requested not to follow the entourage.

Once the image arrives at its destination, OPENING PRAYER OF THE EXHIBITION OF THE IMAGE OF SANTA TECLA.

Currently all places are sold out.

If you do not have a reservation for the above activity, you can nevertheless admire the Giants in the lobby of Sitges Town Hall from 9pm and also throughout September 22nd.

In the Hall of Cases Noves

14: 00h MUSKETS ARE FIRED AND THE PARISH CHURCH BELLS ARE RUNG
La Fragata
Firing of 21 morterets by Grallers La Sitja on their 15th anniversary.

20h GRALLES CONCERT + LES GITANES D’ANTES
Casino Prado
The doors will be open to the public from 7:30 p.m. The event will begin at 8:00 pm with the Gralles concert.
“Grallas” (flageolet) concert and performance of leaps and pirouettes of LES GITANES D’ANTES (satire)

23:00h  FIREWORKS
The firework display by Pirotècnia Igual, will be launched from two points simultaneously.

Kindly follow the recommendation to view it from private balconies and terraces.

This year and exceptionally on the occasion of their 41st anniversary, Las Panderatas and the Colla de Bastons Noies, will make the offering to our Co-Patron on behalf of the entire town. The mass will be sung by the towns people with the participation of the Chorus Amics de l’Orgue.

At the end of the celebration, “Goigs” (praises) to Santa Tecla shall be sung by the Chorus Amics de l’Orgue.

At 6pm, starting at el Baluard in front of the Parish Church, a human tower will walk up and down the stairs of La Punta Organised by the Colla Jove de Castellers de Sitges.

19h POPULAR DANCES PARADE
No prior reservation required. Doors open 1 hour before. Parade of Popular Dances accompanied by their musicians, in honour of Santa Tecla. There will be a different route this year due to the pandemic.

Route: it will begin on Avenida Sofía by the roundabout with Paseo de Vilanova and will go through Paseo de la Ribera, it will follwo through carrer Nou, Mayor, Plaza del Ayuntamiento and Baluard until the entrance to the parish of Sant Bartomeu and Santa Tecla.

It is expected that there will be several rows of chairs for the public along Avenida Sofía and the promenade, but no public will be allowed from calle Nou to the entrance of Santa Tecla in the parish church. The tabernacle of Santa Tecla will be paraded through the streets carried by the Pubilles and the Hereus of the neighborhoods and entities of Sitges and accompanied by the group of bearers. This year exceptionally it will not be considered a liturgical procession. This route can accommodate up to 3,445 people seated in two rows and complying with the required safety measures.

22:30h SANTA TECLA’S CONCERT
Hort de Can Falç
With the local group Veneno en la Piel
Act without prior reservation of entry.
Controlled and limited capacity until complying with Covid regulations.
The public will be arranged in tables of 4 people.

Itineraries not confirmed yet

There will be 3 routes:

8:30h Route 2, Matinal “Balls Blancs” and Gegants :
With the oldest white dances and the biggest giants

General aspects:
• THE MATINAL CANNOT BE FOLLOWED FROM WITHIN THE ROUTE
• The route will be delimited and without seats
• Remember that the mask must be worn correctly at all times
• Parking area where the Barraques and Festa Major concerts took place 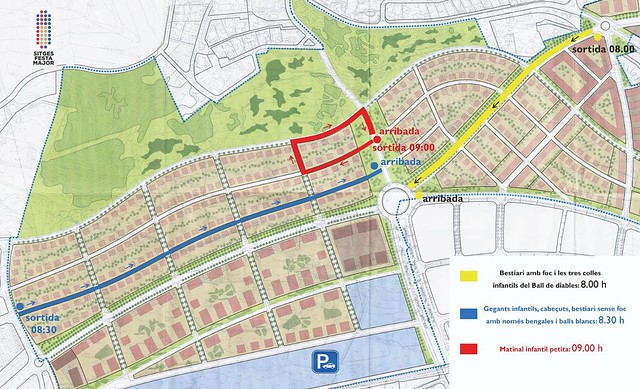 17:45h EXHIBITION OF COLLES SARDANISTES
Hort de Can Falç
With the participation of a representation of groups from all over the country and of different age categories and with the musical performance of Cobla Maricel.