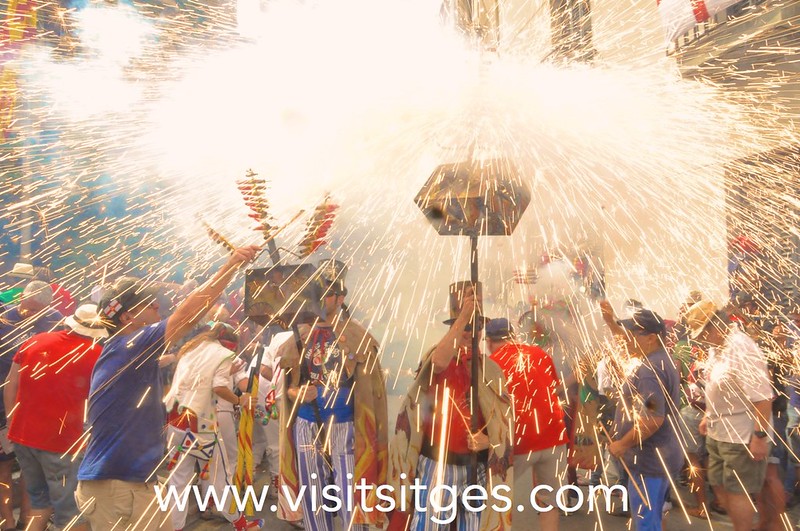 Santa Tecla (September 22nd-23rd)
The Festa Major of Santa Tecla is very similar to the Festa Major of Sant Bartomeu with a few small differences. The standard bearer during Santa Tecla is always a woman, there is no cercavila at noon on the 22nd and it takes place instead in the afternoon. The matinal on the 23rd of September is a children’s matinal and boys and girls celebrate the fiesta with their own gegants, dracs and àligas made by themselves (some of them are true small replicas of the originals). It is perhaps a more intimate fiesta, it is the tiny “Festa Major”, with less affluence that Festa Major of Sant Bartomeu, but with its charm and character.
During the weekend prior to Santa Tecla, Sitges organises the Nit de Foc, the night of fire, with a spectacular correfoc (literally in English a “fire-run”). Different groups of devils and fire-beasts (papier-mâché dragons and eagles) from Sitges and other local towns gather for this event

FacebookTwitterRedditLinkedInWhatsAppPinterestVkEmail
We use cookies on our website to give you the most relevant experience by remembering your preferences and repeat visits. By clicking “ACCEPT ALL”, you consent to the use of ALL the cookies. However, you may visit "Cookie Settings" to provide a controlled consent.
PREFERENCIASREJECT ALLACCEPT ALL
Manage consent