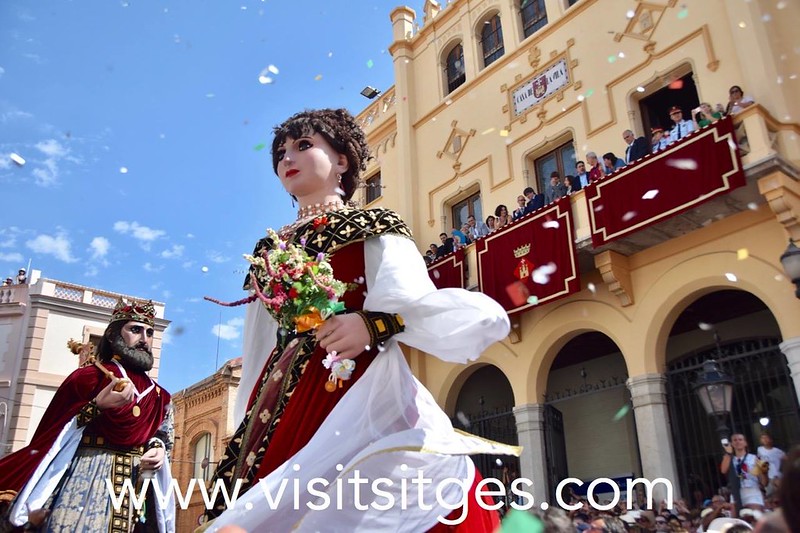 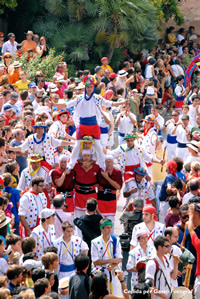 It begins on the 21st of August with the “pregón”, the official opening speech.

On the 22nd of August the President of the Committee for the Festa Major receives the flag of Sant Bartomeu.
At noon on the 23rd of August, the grallers (musicians that play the gralla, a Catalan wind instrument) enter the town via calle Sant Francesc, go through the Cap de la Vila, then Calle Mayor and arrive at the Plaza del Ayuntamiento (in front of the town hall).

At 2pm the parish church bells are rung, 21 muskets are fired and in the Cap de la Vila two emblematic Sitges sardanas are danced: The Procession of Sant Bartomeu by the maestro Antoni Català and Festa Major by Enric Morera.

At quarter past two in the afternoon the spectacle begins: folk dances, gegants, cabezudos (papier maché big-heads), dimonis (devils), drac (dragon) and àliga (eagle) congregate in the Plaça del Ajuntament and make their way along calle Major until the Cap de la Vila. At this point the full dance of the Moixiganga is staged. (The Moixiganga is a traditional and historical Sitges dance which represents religious scenes from the Passion of Christ.)

Later in the afternoon the civic procession takes place departing from the home of the holder of the Presidency of the Committee for the Festa Major and then on to the home of the Standard Bearer of the Year where the image of the Saint is retrieved. From there, on to the parish church where they are received by the Rector and the procession (including all the elements of the earlier one), winds through the Sitges streets. The itinerary varies each year depending on the location of the homes of the Committee President and Standard Bearer.

At 11pm there is a spectacular firework display in front of La Fragata, which congregates on the Paseo and beach thousands of people,who come from all over the county and further afield. After the fireworks, the verbena (eve celebrations) of the Festa Major begins with sardanas, music on the Paseo Marítimo and the traditional folkloric dances that carry out the Descent of the Stairs at the Punta de Sitges.
On the 24th of August at 6am, the matinal begins and the folkloric dances follow an itinerary through the streets of town while flowers are handed out to lady spectators. A mass is said in honour of Sant Bartomeu, at the end of which, the Sortida d’Ofici (exit from mass) takes place and the different dances and dancers cover the small distance between the parish church and the town hall while the sardana Festa Major is played and the band goes through its repertoire. To crown the matinal, the castellers build human castles or towers.
In the afternoon another civic procession takes place similar to that of the previous day, although the itinerary may differ and thus it is advised to check it from one year to another. The cercavila (circuit around town) ends with the Saint being returned to the parish church. Meanwhile in the plaza del Baluard in front of the church all the fires and crackers are lit, the dances are carried out to their respective music and a small firework display takes place.

It is, in all probability, one of the most emotional and awe inspiring moments of the fiesta.
With the Saint restored to the parish church, the gegants, drac and àliga (papier-mâché giants, dragons and eagle) dance their farewell.

Events, news and updates about Sitges