On the outskirts of Sitges 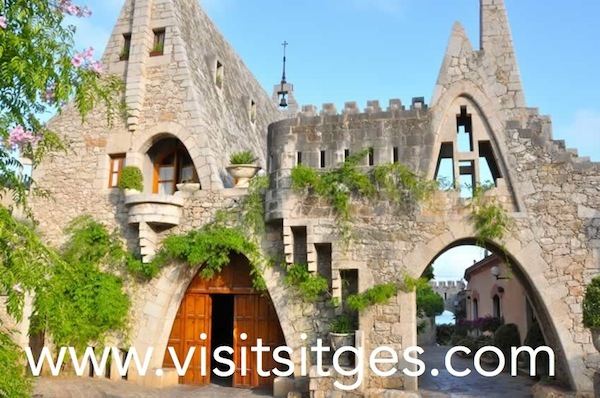 On the outskirts of Sitges

The Celler Güell is in the little village of Garraf, still within the Sitges municipality and just a short drive away along the C-246 coastal corniche-like road between Sitges and Barcelona.

This collection of Modernista buildings includes a cellar, a house and a chapel. It was built towards the end of the nineteenth century, commissioned by industrialist Eusebi Güell who owned a number of vineyards in the Garraf area.

There had been controversy surrounding the authorship of this group of buildings. On the one hand it had been suggested that Francesc Berenguer i Mestres, a disciple of Antoni Gaudí was responsible for the design and on the other hand that it was a project created by Gaudí himself.

The original plan is kept in the Sitges Historical Archive (located in the building adjacent to the Santiago Rusiñol library). It is signed by Antonio Gaudí and thus put an end to the controversy.

The buildings are asymmetric and make many references to medieval structures. The parabolic arches are remarkable as too are the wrought iron and brickwork. The cellar is currently managed as a restaurant.

After visiting the Güell Cellar, why not visit the Garraf beach with its quirky racing-green and white wooden beach huts, unique to this little village. (The beach can get quite busy in the summer months.)

The Sant Joan Hospital is on Calle Cardenal Vidal i Barraquer, 2 in a Sitges neighbourhood called Poble Sec located on the other side of the train tracks, away from the sea and town centre proper. Its origins go back to 1324 when Bernat de Fonollar, feudal lord of Sitges, founded a hospital for the needy on the site of what is today the Palau Maricel de Mar. The current hospital building, designed by Josep Font i Gumà and opened in 1912, is considered one of the most important examples of Modernist architecture in Sitges.

The building consists of two symmetrical side wings and a middle section that supports a dome lantern, which has become a visual symbol for the hospital. The chapel attached to the building houses a 17th century altarpiece.

FacebookTwitterRedditLinkedInWhatsAppPinterestVkEmail
We use cookies on our website to give you the most relevant experience by remembering your preferences and repeat visits. By clicking “ACCEPT ALL”, you consent to the use of ALL the cookies. However, you may visit "Cookie Settings" to provide a controlled consent.
Cookie SettingsREJECT ALLACCEPT ALL
Manage consent

This website uses cookies to improve your experience while you navigate through the website. Out of these, the cookies that are categorized as necessary are stored on your browser as they are essential for the working of basic functionalities of the website. We also use third-party cookies that help us analyze and understand how you use this website. These cookies will be stored in your browser only with your consent. You also have the option to opt-out of these cookies. But opting out of some of these cookies may affect your browsing experience.
SAVE & ACCEPT
Go to Top