Tourism in Sitges – A walk through Vinyet and Terramar 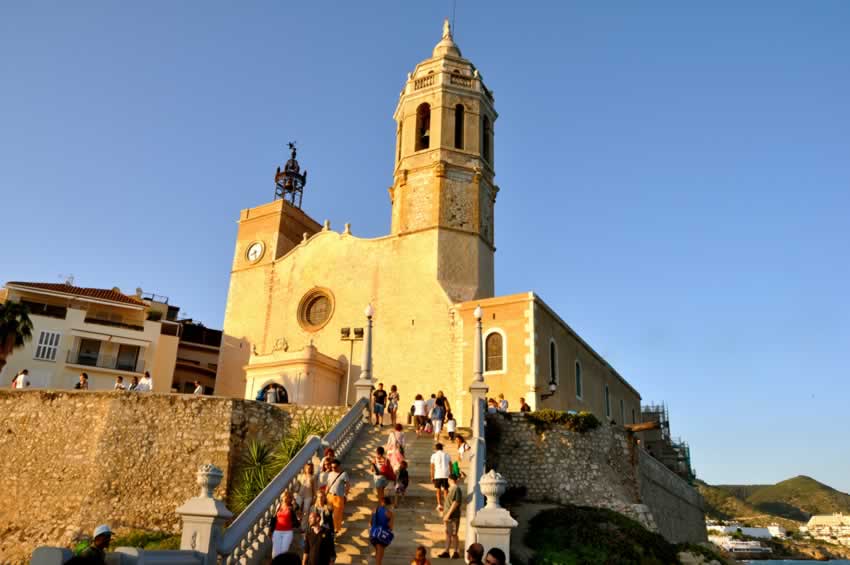 We will start this route from the Plaza de la Fragata in Sitges, under the Parish Church of La Punta, here the Paseo de la Ribera begins:

“Villa Lola” (Josep Barnet Albareda’s house), 1907 (rebuilt in 1976 like the original demolished one). Passeig de la Ribera, 3. It is a modernist building that stands out for its headboard decorated with floral ornamentation and its curved balconies with iron railing.

Isabel Ferret House, 1899, Enric Sagnier i Villavecchia. Passeig de la Ribera, 29. The different types of openings on the three floors stand out, and in the upper part there is a barbican made of wood and tiles and a railing that imitates the battlements of a castle. Eclectic style.

Casa Marina Planas, 1908, Gaietà Miret; Passeig de la Ribera, 22. Modernist style that is reflected in its floral ornamentation on the edges of the windows and on the railing of the roof.

Pilar Parellada House, 1916, J. Domènech Estapà; Passeig de la Ribera, 49. Building of popular work, consisting of a ground floor and two floors. It has a sundial painted on the facade as decoration. It has a protruding cornice covered with tiles.

Llúcia Catasús Soler House, 1915, Josep Graner; Passeig de la Ribera, 54. Eclectic style. Ground floor and two floors with a Catalan-style terrace. In the central part there is a relief of Sant Jordi as an ornamental motif. On the second floor there is a gallery with round arched windows.

Retracing our steps and going back towards number 49, on the corner of Hotel Subur turn left onto Carrer Espanya:

Casa Ferratges, 1910. Bassa Rodona, 13-17. It is a large Modernist-style building. The lintels of the openings on the first floor display floral decoration.

Continue towards Plaça Espanya where you turn left (you will pass in front of the Correos post office) until you reach Avinguda Sofía where there are a number of grand houses:

Walk down Avinguda Sofía towards the sea and turn right onto the Passeig Marítim to find yourself in the Terramar neighbourhood. Promoted by Sabadell industrialist Josep Armengol i Durán, Terramar was designed to be a garden-city. The project was begun in 1923. Most of the buildings are designs by architect Josep M. Martino, and are generally Noucentista in style featuring three main bodies, the middle one being given the most prominence. The façades are mostly oriented towards the sea and the buildings feature terraces and porches.

Casa Vilella, 1919 (formerly the “Residencia Helvética” and actually Hotel Casa Vilella). Architect Joan Rubió i Bellver. Passeig Marítim, 21. A Modernist-style building, reminiscent of the style of Catalan “masías” mainly due to the profile of the roof tiles. The “ground floor” of the house is raised above street level. There are arched galleries on both of the two superior floors.

Casa Sansalvador, 1923. Architect Josep M. Martino Arroyo. Passeig Marítim, 61. In the fashion of other houses in the area, this building has various volumes all crowned with balustrades. The tower features a sundial in sgrafitto. The front porch features a portico.

Casa Josep Freixa, 1919. Architect Josep M. Martino Arroyo. Passeig Marítim, 69-70. This home is classic Noucentisme and features a pediment with cornice on the main body of the building. The decoration over the entrance, supported by Ionic columns, features floral designs and vases carved in stone.

The Terramar Park is at the end of the Passeig Marítimo, one block inland from the sea. These gardens designed by Miquel Utrillo feature a tree-lined path that is the axis of symmetry of the central pond. There are swings for the children and a small sand football pitch.

Sanctuary of Our Lady of the Vinyet, 18th century. According to legend, this small sanctuary was built on the site where a slave found an image of the Virgin under a vine, and it is said this is the origin of the typically Sitges’ girls name “Vinyet”. Documents dating back to the 13th century make reference to the sanctuary. The building has been modified over the centuries, the most important renovation taking place between 1727-33. It is neoclassical in style and has a single nave with 10 richly decorated, Baroque-style side chapels that are interconnected. The bell tower dates back to 1872. Some improvements were made during the 20th century. The people of Sitges show great devotion to Our Lady of the Vinyet, and sailors in particular, whose devotion has filled the chapel arches with ex-voto model ships. The façade is simple and austere in great contrast with the sumptuous and Baroque interior.